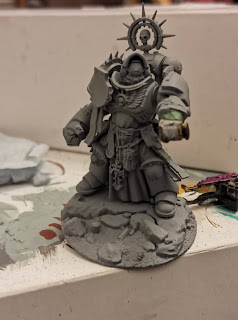 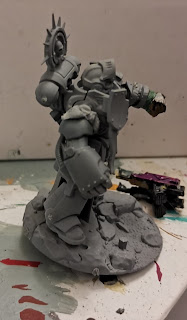 I've not progressed far with this at all really, all I have done is green stuff the left hand on and 2 really old, Godwin pattern bolters together to represent Dorn's Arrow, the Zinge Industries flexible ammo feeds are on the way, well no, not on the way as I ordered them on Christmas Eve. For ammo storage I'm looking at the bolt storm aggressors hopper and yesterday I won an old metal version of him for the back banner. As the post offices are open again I expect it by Monday next week.

In other project news, on Christmas eve I also ordered Ezikael and High Marshall Halbrecht to begin crossing those 2 over the Rubicon Primaris as well. There is also a Mirco Machine Steamrunner on the way for that Falcon Conversion

Posted by Poxy Proxy Predator at 07:30