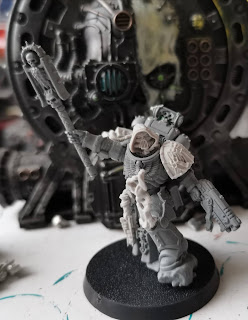 Some progress on the Asmodai, the left shoulder pad is pretty much a perfect fit, once the old arm is removed. 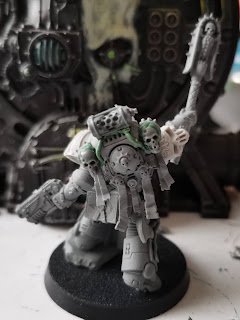 The skull pad took a lot of time and effort and involved chopping the pad already there off and about an hour and half playing with various files to get a fit I liked. Ended up snipping the power cables off the underneath part and moving them to the sides, or it would have been even longer with the files.

Yes I lost the tiny knee pad, so to hide that cock up I'm using the smoke from the fine cast version, which actually looks okay.

The decapitation went well, with only a tiny tidy up on the hood needed. 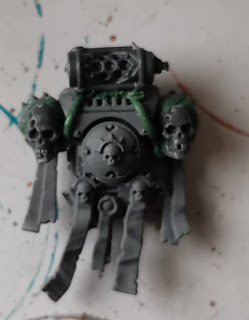 Power pack, so trimmed and tidied up the vents, then trimmed the backs off a couple of skulls, and then green stuffed those onto the vents. The census was green stuffed on top of the pack as I couldn't find anything that would work in the same way as the brazier on the fine cast version. Will add smoke to this today.

Posted by Poxy Proxy Predator at 06:48

That looks superb so far, the new Primaris Chaplain is my favourite Primaris sculpt to date I think, just understated majesty in his pose.