Again with the day working getting in the way of painting and video gaming...

Got out of work yesterday morning and rather than get on with the new season of Destiny I started painting the Ezikael, going with the green armour to match the Azrael I'd already done, I had forgotten the Azrael robe was screaming {beige} skull, rather than the pallid witch flesh I'd done the Cypher with.

I used the Judiciar body, a set of Intercessors arms, one that holds the bolter high up, a head from the Dark Angels upgrade sprue and Ezikael's power pack and sword. 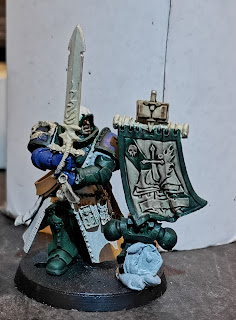 A couple of the wip pics 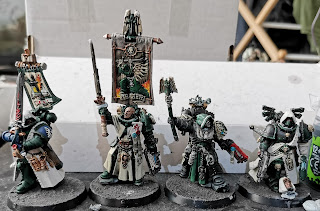 And here's the old gang as I have them currently, Beliel is a coin toss on a Captain in Gravis armour {cheapish} or the Custodian Dreadnought with the Sword {not cheap}, with a couple of heavy bolters strapped to the fist arm. Sammy isn't even on the pending projects list.

Posted by Poxy Proxy Predator at 17:04