So this week a contest I had entered was finally draw and I won! I have won a Vorax Robot! 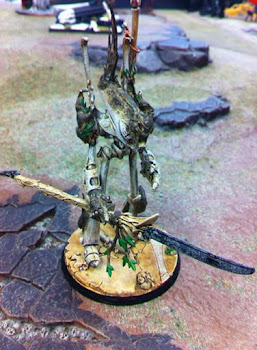 Here's my winning story.
Okay 2 stories... Grandfather Telvig, Origin.
Telvig woke with a start from the recurring dream he'd been having for the last few months now, Isha and Curnos holding their hands out to him, telling him this is the only way, with a feeling of dread, he got a shower, dressed, kissed his children & wife and went to the portal to go to Commaragh. Many of his kind had chosen to give up work but Telvig had always worked, he enjoyed his position as Senior Clerk at Universal Shopping in Commoragh. Today was the last day before the big spring festival and long weekend, so very little work needed to be done but he could dot his I's and cross his T's and catch up on missed paperwork. After lunch a couple of the office girls ask the Boss if they could leave early, there was a party starting soon that they wanted to attend,
"Where is this party?" The boss asked looking them up and down, " You're still dressed in your work things, you can't want to go dressed like that?" One of the girls lent over and whispered in his ear and a slimy smile slid accross his face, " I'll join you," he said standing up and grabbing his coat, "Telvig can you lock up tonight, and make sure you check Longmires files are in order, she's the 3rd person to go missing this month front this office," throwing the keys to him. The boss and the office girls left giggling, Telvig's sharp hearing caught "unding more like an orgy than a party", as the group went under his window, he tutted to himself and went about his duties.
He ended up working later than he'd planned because of sorting out Longmire's desk and there where fewer people around than normal when he left and locked the office. The moment he reached the street Telvig felt hostile eyes on him, he hurried threw the streets towards the portal that would take him home. It didn't take long for the noises to start, voices but he couldn't make out what was being said and the sound of a blade being drawn along a wall, Telvig turned and saw a silhouette of someone, stripped to the waist and with their head to one side like he was listening to someone, and he ran, he threw his case at his pursuer and dived into the warren of allies that were surrounded his office. The pursuer was as well versed in the allies as Telvig and in better shape and gained ground rapidly, catching Telvig in an open area that held the bins for several offices. The pursuer tilted his head again, as if listening to someone telling him something.
"His head? They talked to him this morning?" A smile spread accross his face ,"another head for my collection." The killer reached out to Telvig with the blade when they both heard laughter and footsteps coming from the ally they had run down, he quickly hid the blade behind his back. A stranger entered the space, dressed in the bright outfit of a Harlequin, "What do we have here?" She called out, a forced brightness in her tone, the pursuer, looked like he heard the voice only he could hear again before speaking," this is nothing to do with you follower of Cegorach, leave now."
The Harlequin's mask pouted, and spoke "But my dear fellow," she stepped lightly aound the killer and helped Telvig to his feet, before turning back to him, "this is not what it seems," 4 more players dropped down from the roof tops, her tone darkened " it is you who should leave," Telvig never saw what happened next but one moment the Harlequin was unarmed, the next she had a staff and it was under the killers chin,"LEAVE", she commanded, the other players had all drawn weapons as well, but not the ones he'd seen them use before on stage, these look like weapons of war. The killer looked around the Harlequin at Telvig and left silently. The Harlequins all turned to Telvig, their manner shifting again, 2 of them dusted Telvig down as the one with the staff spoke to him, " Mr Telvig we need to get you home, there are things you need to do."
Posted by Poxy Proxy Predator at 15:43