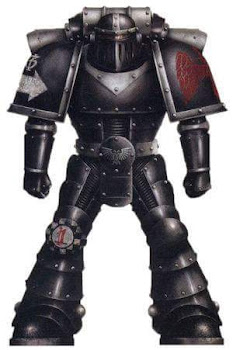 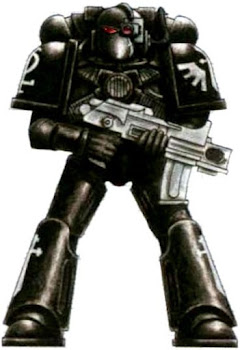 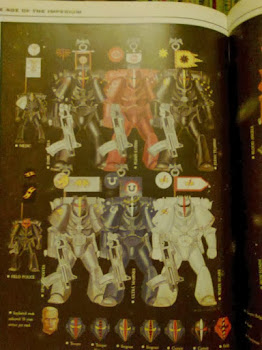 About twice a month someone askes about how to paint Fallen Dark Angels in the DA Group I'm in, and I get to go reet Northern on 'em.
In the dim and distant past of the late '80's Dark Angels were black with red markings, Veterans had a red strip on the helmet, see the Consecrators Chapter, later none Terran recruits had white markings as can be seen on the second picture, after The Lion was united with the Legion at Caliban, recruits
raised on the homeworld were allowed green trim on one shoulder pad.
3 versions of why they became green are around, one is an early fax machine printed out the marine with green looking armour, so the artist painted the army he'd got green and by the time any one knew it was to late to change, the second is that the sample marine sent out to the painter was a Salamander, the last version is that on the box cover they where black but seen under a green light so looked green.
Posted by Poxy Proxy Predator at 22:27