The One Who Takes

As I have said my Harlequins are based on Batman characters. Now the problem I have is some of these don't translate well into an Eldar frame of reference so I was hoping you guys would help me out with giving the Batman or other source material inspired characters a more Eldar feel? I'm aware Mimes don't have any rules in game.
Here's what I've already got;
Joker (Troupe Master) - Cegorach
Harley Quinn(Shadow Seer)- The Mother
2 Face (Death Jester)- He of 2 Faces
Ras' Al' Ghul (Mime)- Dæmon Head
Bane (Mime)- The Brute of Comorragh
Greegann (Chorus)- The Crimson King
Milliner/ Mad Hatter (Chorus)- The Crowned Fool
Freeze (Chorus)- The Frozen Heart
Poison Ivy (Chorus) - Wild One
Pappa Lazarou (Mime)- The One Who Takes
Skeleton (Mime)- Bringer Of Night
Azreil (Chorus)- The Grey Knight
Scarecrow (Mime)- The Liar
Death Strike (Chorus)- Falcon.

So what do you think? 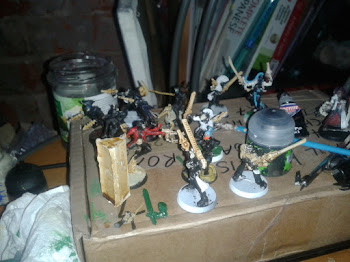 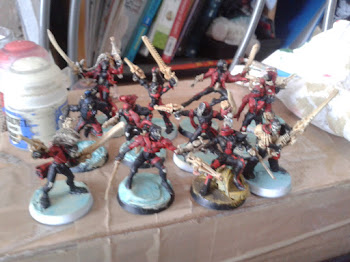 Finished off the Troupe based on Papa Lazarou, along with their Death Jester this week. Not much else has got done though. Plan on starting one of the Wraith Lords next, alongside magnetising the other Space Crusade Dreadnought next week. On Friday I'm buying the 2 Voidweavers and the plastic Death Jester, which I plan on painting up over the rest of the month.
Posted by Poxy Proxy Predator at 20:01