Another Trip To WW 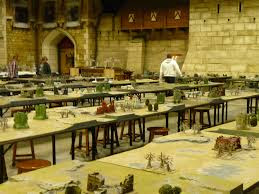 Plans are afoot for another trip down to Warhammer World in January, the table is booked, but just we only got a standard table (well 2 pushed together as there are up to 6 of us going as of now). So lesson learned-keep an eye on when the table booking opens and get in quick!
So plan A; We have 3 Eldar armies, one Craftworlds, one DE+Harlequins and my Harlequins, with that in mind and also how long the game took last time with just 3 of us, I've built a story around an alliance of these 3 Eldar armies. After chatting with one of the chaps we'll be playing against he's taking an Inquisition force, one guy hasn't talked about what he is taking ( he only confirmed a couple of weeks ago) and the last guy has a nid army. Armed with this knowledge I started thinking; what would make the Inquisition divert a nid Splinter fleet? One of Vauls fabled 100 swords? So story version A is the Ordo Xeno believe they have uncovered one of the legendary blades forged by Vaul for the War In Haven and to secure this mighty artifact for their own ends they have diverted a Splinter Fleet to a back water Maiden World, the 3 forces of Eldar have been brought together to defend the Maiden World and keep the blade safe. The nids are there for the all you can eat buffet. And if player 6 brings Imperial they are a buffer between the nids and the Inquisitor.

Posted by Poxy Proxy Predator at 05:42