It’s that special time of year. No, not the season to be jolly, it’s Christmas Jigsaw time!For the next few days we’ll be teasing you mercilessly by slowly revealing something that’s coming soon from Forge World... very soon! Take a look, can you guess what it is? 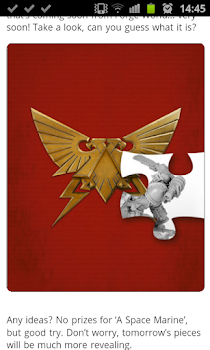 Any ideas? No prizes for ‘A Space Marine’, but good try. Don’t worry, tomorrow’s pieces will be much more revealing.
Last weekend we released the Red Scorpions Vanguard Veterans Upgrade Set. It’s a great set that lets you upgrade resin or plastic Space Marines to Red Scorpion Vanguard Veterans and also includes Veteran Sergeant Culln, a legendary battle brother who later rose to be Lord High Commander of the Chapter.A big fan of the Red Scorpions, Phil Stutcinskas from the Forge World Studio has been working on his Red Scorpions army for years. It’s gotten pretty big, and this is just a small part of it. 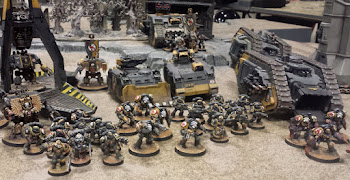 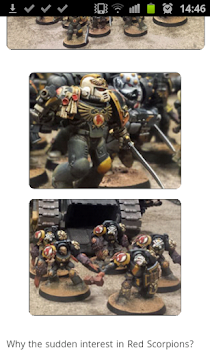 Why the sudden interest in Red Scorpions? Well, I’ve just heard that the Chapter, and the heroic Carab Culln, will be making a return in 2016 with a new Imperial Armour book! That’s all I’ve got right now, but when I know more you will too.

Posted by Poxy Proxy Predator at 14:47