Well today I'm filling some time while sorting out my re-education.

So I've mentioned size being an issue with the Poxy Proxy Predator, and said I'll bring this up later, well now is as good a time as any.

As I said the Land Raider is the biggest tank you can buy that's made by Games Workshop, and it is rather large, but not as big as mine. We found this out the other week at the Coppull and Chorley Knights, the game club I attend, when I fielded my Tank against a Deathwing Army with 2 Land Raiders. My tank was a little bit larger than the Land Raiders. This did lead to some barracking about how mine's bigger than yours, even if it is by accident.(On the plus of thi 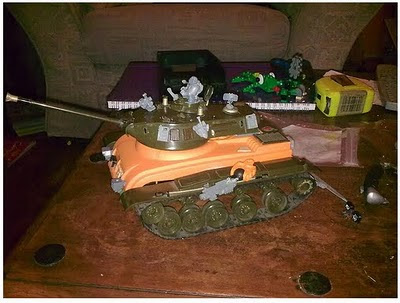 s argument is that my army, The XIX Chapter, now has a great centre piece to from around and with a bit of tweaking I can use some in game rules that apply to one of the Space Wolves Dreadnoughts to represent what the Predator means to the Chapter.) But overall everyone seemed to like my efforts so far, at the game I'd actually painted it black and bleached bone, the colours of my army, and even the none gaming friends that saw it said that it looked a hell of a lot better just for that simple coat of paint.
As you can see orange and green don't quite work together. Since this was taken the tank commander has been removed from the model as it didn't go with the look I was after, and the turret itself is now moved slightly backwards from this position, but as it's held on by blu tac, that is only a minor detail. Also the side weapon mounts have been drilled out and with the addition of some more Lego & grey stuff now sit level with detailing on the track mud guards.
Posted by Poxy Proxy Predator at 15:02 No comments: