These 2 are my counts as bikers for the moment, will be upgrading them with the Demigryphs at some time, if the rule book comes out this could be a couple of months off yet. 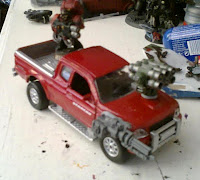 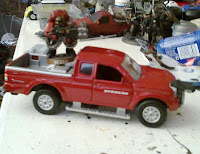 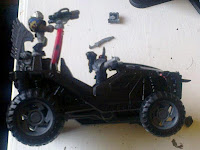 And lastly here is my Ravenwing Sgt/Champion on a big monster thing.
Posted by Poxy Proxy Predator at 11:52 No comments: 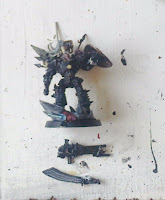 Here we have the re-work on my 1st Company Commander I've swopped out the claw and both arms, the arms are now the spare set you get in the Asterion Moloc kit from Forge World, I'm also using the sheild you get as a Storm Shiled when I equip it with a Thunder Hammer. The under over long barrel storm bolter is a conversion from 2 Space Crusade Chaos Android gun barrels added to a cut up chaos Termiinator combi weapon, the big sword is from an Ogre Man Eater with a chain axe head added to it and a big pole on the bottom.
Posted by Poxy Proxy Predator at 09:25 No comments: 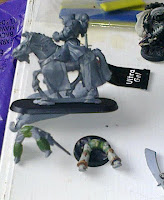 I'm slowly working my way through the 10 Compnaies of the Lions Blades, I've got the 3rd and a 1/4 of the 1st Company done already, so my next poject/target is to get some of my Ravenwing done. As the Ravenwing are a massivly mobile force I'm looking at bikes and other stuff I can use to give me some options when it comes to making these guys.
As usual I was rooting through my clubs bits box when i came accross a couple of horses, there's at least one more so I can take that as well to give me a Squad of 3 that I'll use as my Command Squad for now, then I'll use them as Company Veterans. The idea for this came out of the background I've got written down for the Chapter in that one of the worlds they recruit from has Knights and these horses have just been gene breed to be bigger and tougher than standard horses.
The big idea is to use a box of the Demigryph's as mounts for my Command Squad with the 2nd Company Commander ridding the Kev White sculpted Demigryph 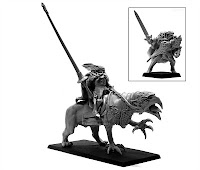 with some wings added, the rest of the Command Squad will be on standard boxed models 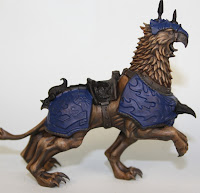 As it stands now I have 3 counts as bikes, 2 on horse back and one on a lizard type thing, one counts as an attack bike made from a big buggy thing that was for Spiderman and one bike with a Librarian one it.


Demigryph image "borrowed" from http://targetpaint.blogspot.co.uk/2012/04/demigryph-off-workbench-and-onto.html
Posted by Poxy Proxy Predator at 10:12 No comments: 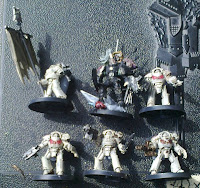 Here I have the Command Squad for The Lions Blades 1st Company, all in Tartaros Pattern Terminator Armour, expect the Company Commander who is a scratch built and was once a counts as Abbadon and is now Belia.

The Standard bearer has already had a close view of it's assembly, and the Apothecary has the Grey Knight Narthicum arm, I had to cut off much of the shoulder joint to get it to fit under the Tartaros shoulder guard.

The bottom photo shows one standard Tartaros pattern Terminator, The Squad Sergeant and the Heavy Flamer that comes with the kit.
Posted by Poxy Proxy Predator at 09:11 No comments:

Here I have my assassembled 1st Company for the Lions Blades Chapter.

Well here we have the kit as it came from Forge World, as well as along side a Contemptor and a with a standard Marine as well. I'm liking this kit from Forge World, I posted the top photo on Facebook's Warhammer 40K group last night and got the predictable answer that this is now Finecast resin, but I don't think that it is. What I think has happened is that this sprue technique uses less resin than the old style which gave you the big wedges, that I so love to use as road blocks. 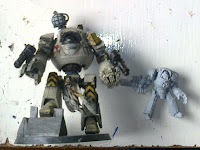 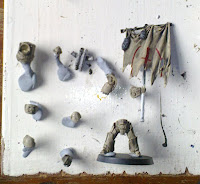 Here, at fracking last, are my Tartaros Pattern Terminators. I've only got this one done so far as I wanted to see what one would look like. As you can see the mini it's self is very clean when it's finished.
Here we have it along side my Belial, it will be his Standard bearer after all when I get the squad finished.

The Tartaros Pattern Armour is a joy to paint, and the wash really did pick out the details and the dry brushing does add a nice high light to the armour, I'm really looking forward to finishing the full squad.
Posted by Poxy Proxy Predator at 11:17 No comments: 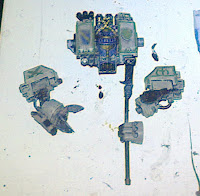 This is the repainted Librarian Dread for my 8th Assault Company. Nothing elas has been done apart from a Kommando Khaki over the red and black, then a Nuln Oil wash befroe dry brushing with Bleached Bone.
Posted by Poxy Proxy Predator at 11:08 No comments: 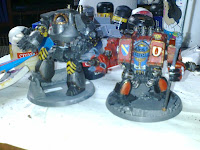 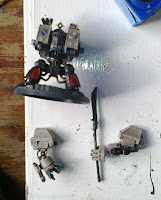 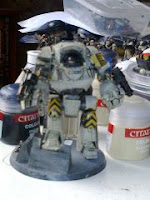 Here we have my 2 big projects from the last couple of years, my Librarian Dreadnought and my Contemptor Dreanought. As you can see I'm re working them both into my Chapter Colours after thinking about what I was doing and slimming my army down from a massive Chaos Force to 2 smaller forces, one Chaos, one Loyal ( a Dark Angel Successor Chapter now named the Lions Blades). As I'm showing here I'm currently painting the Librarian Dread into the Blades colours so far I've given it a base coat of Kommando Kharki when I get back I'll give a wash with Nuln Oil and them after I vote I'll start to dry brush the Dread with Bleached Bone.
I'll be saying that both the Contemptor and the Librarian are Venerable Dread if I'm not playing them like they should be, hence doing them in the Deathwing colours of the Lions Blades.
Posted by Poxy Proxy Predator at 15:08 No comments: