Hi there long time no update, but as I'd finished my tank I took some time off, got a girlfriend and a job and now I find myself with some time on my hands again as both seem to have gone now.

So back to the project work. Well as the tank has been finished and put out there to play I've gone onto other things. Photos will be arriving over time as I work out the best way to get them off Face book that is.

My army for Warhammer 40,000 started out as a Loyalish Marines, but I've since fallen down a dark path and have added more and more Chaos additions to it and now have a much larger Chaos army than loyalist, which is good as with Chaos you get more choice. The Core army is still the same but I've added some Chaos flavour to it with the addition of some Thousand Sons, some Khorne Berzerkers and some Nurgul Havoc's. The Slaanesh are (will be when they are bought and made) my Chaos Terminators with the heads of some Dark Eldar Wyches and one squad of Chosen made from the Dark Eldar Wyches box set. I will be adding more of the Slannesh Force to my army over time as I'm making them from a corrupted Sisters of Battle Order, as I like that idea. But right now finances dictate that buying an all metal army is way way out of my price range. Fingers crossed by the time I get round to this part of my army The Games Workshop will have done plastic Sisters of Battle and this good idea will be made.

But onto what my next project will be. With the Ascension of the Leader of the Army to a Daemon Prince I've added a new Unified Chaos Lord to my Army who was leading his own army into exile in the Eye Of Terror. This is my Dark Mechanicus Lord Hudson Gaden with his appreniti and his Mechanicus Sketarri Legion Troops and, the reason he was kicked out of the Imperium, his Androids.

For this army I've already built and painted Gaden who came from the Games Workshops Bloodbowl range, as a base it's an Undead Wraith, I've added blades to one hand to give him Lightning Claws added a 3rd arm and attached a twin linked bolter to that and have shoulder mounted a plasma pistol. The great thing about a Chaos Lord is that this is legal!

Now here's the fun bit I've got a copy of The Eye Of Terror Codex from way back when and in this is a Chaos traitor army which is what Hudson Gadens army will be. As this army's HQ I've already bought and built 3 Tech Priests types. One is an almost standard Space Wolf Iron Priest, all I've done with that model is to cut the hammer that it comes with and replace it with an axe head( this guy will also be used in my loyalish Space Marine as a standard Tech Marine) He will go by the name of Jervis Babbage. Next is Jellet 'Clamps' Arrol which is the Forge World Titan Tech Priest, an expensive and finely detailed model that i feel my paint job just hasn't done justice to, but I can always go back and do it again, and it's Clamps as his tool arms come with 2 options, clamp heads or a tool head and as we'd just been watching Futurama's Into The Wild Green Yonder which does feature The Robot Mafia and Clamps I just couldn't resist it. Lastly of the 3 is Massey Jubah and head of this Army when Gaden is not around. I've made this model myself from various bits scavved from the Coppull and Chorley Knights bits box, legs and body come from a Space Marine Scout, the head is from a Tau Fire Warrior, the arms are from a Terminator and the back pack is from a Tech Priest. One arm has a twin linked bolter and the other was once a power fist that I hacked up for bits a while ago, I've glued a Dark Eldar pistol to the hand and a flamer nozzle and flamer tank to it as well to represent a cutting and a welding torch on the back pack is a double bladed Chainsword that I'm using as a Daemon weapon and I'm also classing him as wearing Terminator armour.

The rank and file troops will be made from the Catachan box set of Imperial Guard models with the addition of some skeleton bits to convey a Mechanised Infantry feel (no pun intended) with maybe one 10 man squad made up of Skeletons with Lasguns. To add to this I'm either going to find some more of the old Space Crusade Chaos Androids and use those or get a box of Necrons and give them bolters to add some Marine level firepower.

The Fast Attack Section of this army is a mish mash, I'm looking for some dogs to use as attack hounds. I'm also making some attack bikes based on the bike terminators from the film Terminator Salvation, looking forward to that project. Lastly there is a full squad of troops mounted in an APC for this squad I'm thinking of spending the extra and getting a Forge World unit as they are very cool model from there.

For the Elites I'm looking for some bionics that are Terminator sized (currently I'm using the Mega Blocs UNSC models) and I'm going to spend some cash and get some fo the Necromunder Pit Fighters to represent some Big Mutants, or maybe some Ogryns... can't make my mind up and price may play a part in this.

The Heavy Support next, I might just get a Defiler at last and and build that in the colours of this army as well as 2 Leman Russ tanks or I might splurge out on a couple of Malcadors from Forge World, to show his ,former, connections.

Hope you enjoy reading about this next project as much as I will making it. 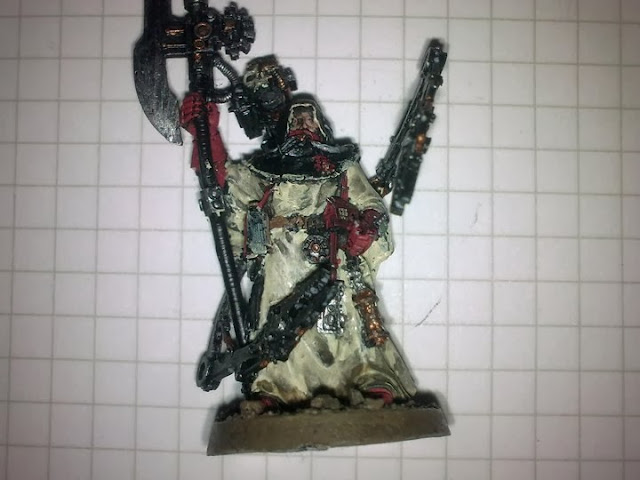 Posted by Poxy Proxy Predator at 11:24 No comments: