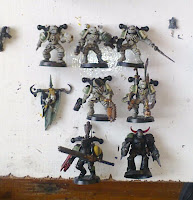 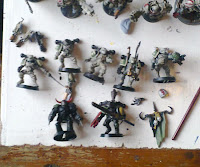 Here we have the Command Squad for my 8th Company of the XIX.
The Command Sqaud is made from Chaos Warrior and Knight legs with, mostly, Khorne Berzerker bodies and Chaos Power Packs. The Captain is still going to be Gabriel Seth as I fully intend to use the 8th Company from the Blood Angel Codex. The power Pack will swop between the 2 as I use him in Termainator or not, I'm also looking for another head like the one on the Terminator so I can use it on the Power Armour. These are once again going to be re re painted back into Knights Of Blood or possibly Carchadons...
Posted by Poxy Proxy Predator at 11:06 No comments:

This is where I'm up to now with my Deathwing
Top Row Librarian and counts as Belial
2nd row is all scratch built from a mix of Chaos Warrior arms, the mk8 errata armour front and Chaos Warrior heads

So now I'm waiting for the Tartarus Pattern Terminators to make up my Terminator Command Squad and I think I'm going to take the hit and buy a Finecast Chaplin in Terminator Armor for this portion of my army.
Posted by Poxy Proxy Predator at 09:51 No comments:

4 Company Masters and the Grand Master on Power Armour 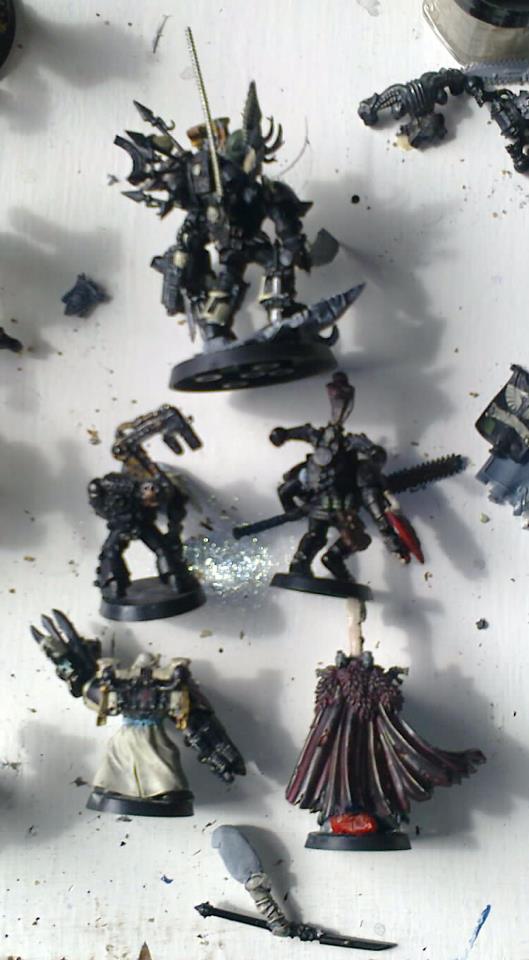 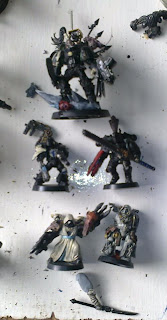 The 4 Company Masters I've got made up so far as well as my Grand Master.

Top is my Deathwing Company Master, will be keeping the Blades on the fingers as I'll be putting some back ground up on the Angels up on my blog and I'll bloody well shoe horn something in so that it'll fit, again Ogyr sword in the right hand and terminator arms on a mk8 errater body with a power pack made from a metal necron destroyer body and a cut up marine power pack a sgymun and an ariel from a tank that went on to make the Poxy Proxy Bane Sword, the top knot comes from an ork boy and lastly the spikes are from the Chaos Terminator boxset.

The 9th Devastor Company Master has to skele arms one with a plasma pistol the other with a Storm Bolter and a Techmarine Sevro Amr back pack, in game terms I'm counting the Servo Arm as a Power Fist.

The 8th Assault Company Master has the big arse chain sword, but as I intend to use my 8th Company with the Blood Angel Codex I'll be using him as Gabreil Seth. I also have a Terminator with 2 Ogre punch daggers on each hand that I'm counting as Lightning Claws to mix it up a bit.

My Chapter Grand Master is made from Terminator Legs with Angels bits added to them, as I wanted to make him look bigger than a standard Marine, he has the front body of a Space Wolf, but with the back ground I'll be giving them this will work, as I took the photo I was changing his weapon from a sword to a Sovnya, http://en.wikipedia.org/wiki/Sovnya, like the Terminator version has, he also has the plasma Pistol arm from Cypher as well as Cyphers back pack and a Storm Bolter on a plate covering his arse.
Posted by Poxy Proxy Predator at 10:50 No comments:

So as I said the other day I've not had much time recently and I'm also restructuring the XIX so I rooted through my assembled models and started looking at the Terminators I've got and thought "stuff lets get my Deathwing going.I already had 2 squads made up, one from the Blackreach box set and the other I'd bought with a load of marines and my assault cannon dread. The others are all scratch builds. As you can see one is at this moment legless, but after the weekend, when I pick up another box of DA Veterans I'll have the legs I want for it. So this week off I'm finally at least filling my walls in over the next couple of days and then I'll be putting some effort into the last 2 squads. to top this little lot off I've got an order coming from Forge World for my birthday of a squad of the Tartaros Terminators, I've also got a single Gery Knight Apothecary arm coming as I plan to make a Deathwing Command Squad out of these guys, just need to get a Standard made up for them. now
Posted by Poxy Proxy Predator at 09:13 No comments:

Here we have  ASTERION MOLOC AND IVANUS ENKOMI OF THE MINOTAURS from Forge World along side an old Chaos Lord in Terminator Armour. There is next to no conversion work done on these really, all I've done is to file down the Minotaurs heads a bit to make them look like  swords. The Ivanus Enkomi is to top, and is almost straight up and down how I got him from Forge World, just the tiny bits I've talked about already.
Below and in Librarian blue we have the Asterion Moloc. Again just filed down the bull heads and added a psycannon arm that I got of a mate ages ago and calling that a Storm Bolter, but everything else is as it came from the box. really looking forward to using these guys on the table. 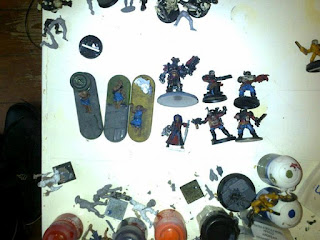 Here we have the 5 Enforcers for Gadens Skittarii, these guys are mostly made from Space Marine Scout bits. The lady in the long coat is Hasslefree Miniaturs Andreah.

The others are 3 objectives I've made from injured , what I think is, zulus on the gw cavlery base and the big guy at the top is another Hasslefree Mini, their Steam Punk Warrior with a Necron Cryptek head from the Scorerer conversion I did and a twin linked bolter
Posted by Poxy Proxy Predator at 10:44 No comments: 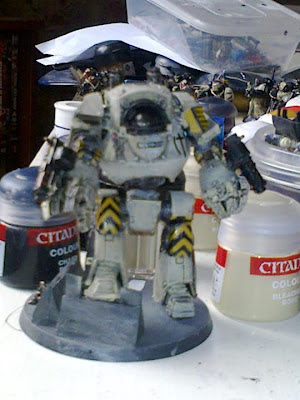 Okay while I was so busy at work I'd taken the Dark Angels Codex in to read and while away a slow hour or 99, and what with getting a couple of games in and, you know, actually using the Contemptor for the first time. So far I've used it 3 times each time painted up in the Iron Warriors colours, so it didn't look right towering over the XIX in the wrong colours so in one of my few days off this last month I took some time out to re-paint it. I've chosen to keep the hazard flashes on the joints as I like the look of them, and just went over it in, and I did this before the paints got up dated, Kommando Khaki and then dry brushed over that with Bleached Bone and then a fine dry brush of humbrol white and Bleached Bone was added as well. I've also renamed it and keeping with the theme of the Border Reivers I had a look through the road atlas of The British Isles, and north of the Border there is a river called Blackadder Water, so with absolutely no hesitation I named the Contemptor Blackadder.

I've also decided to rename the XIX after having a discussion about Chapter names in the Dark Angels group on Facebook, and chose The Angels of the North, as they are based in the galactic and it fits with the back story I have for them
Posted by Poxy Proxy Predator at 10:22 No comments:

For the iron Warriors
Posted by Poxy Proxy Predator at 09:52 No comments:

And here is the art work.

Posted by Poxy Proxy Predator at 09:52 No comments: 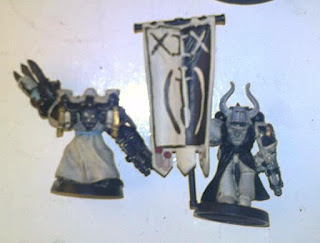 Ohh shiny new format... Shows what being stuck at work for 50+ hours a week can leave you when you do it for a month.

So it's nearly a month since I last posted anything on here not my fault I've just  not had a day when I had the time to get to a PC and get on line , not that I've been able to do much in the last month.

I've picked up a Command Squad box set as you can see, as I'm bringing the XIX back from the Dark Side and going full on loyalist with them. As a result of this decision I'm also repainting the Knights 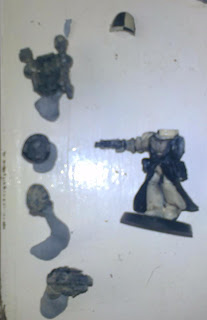 of Blood at some point as my Assault Company and my Iron Warriors as my Devastator Company, most likely do the Iron Warriors first as they'll be the easiest to do, and I don't need to repose any of them.


So I got the Command Squad box set as I needed a an Apothecary I also ended up using the Company Standard as well to give the 3rd Company a decent banner.

Top-Company Master, rear view trying to show the storm bolter and the plasma pistol mounted on the lightning claws. The power pack is actually taken off a Sister of Battle and it is a jump pack, although I'm just using it as a standard power pack. 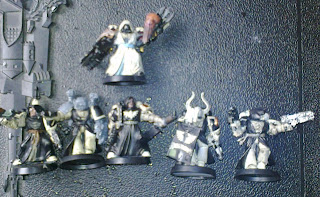 Second- the Apothecary unassembled but painted

Third- the Command Squad as was

Forth- The Command Sqaud as is 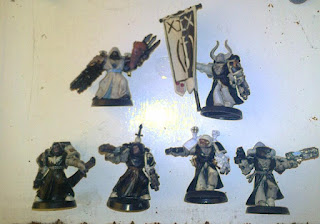 Posted by Poxy Proxy Predator at 09:50 No comments: