Something I've Had Plenty Of Time To Think About

Oaky what follows is a short piece I orginally posted on the Warhammer40K forum site about how the Blood Angel Army list makes a better siege army than the assasult army it was designed to make, comments would be welcome.

I've got insomnai at the moment and find myself with lots of spare hours in the dark, so the other morning while waiting for the Grand Prix practise session to come on the red button on my freeview box I was reading through the Index Astartes with the Iron Warriors in and then I started on the Blood Angels Codex and a thought came to me of doing a very Dreadnaught heavy army, for fun rather than a seriuos attempted at building it. the following list is from memory of what i wrote out
HQ Captian in Terminator Armour with 2 thunder hammers
Captain in power armour with infrnus pistol and power fist(use a tech marine back pack for that)
Elites 3 Furioso Dreads
Fast Attack 1 Baal Predator or 1 Vanguard Veteran Squad
Heavy Support 2 Dreads and 1 Predator
Troops 15 Death Company in a Land Raider Crusader, 3 Death Company Dreads and 2 tactical Squads.


Justifaction :
Death Company- The Iron Warriors are type cast as seige specialist and come to realish the realise of the storming of the breach, hench the death company to represent the frenzied warriors who are over come with blood lust.
Land Raider Crusader- The Iron Warriors have a massive motor pool and are known to salvage tanks and big guns, hence the Crusader, or having seen how effective made their own version.
Death Compnay Dreads-If a warrior is that unhinged give him something to really take the fight to the enemy fortifcations
Baal Pred- why wouldn't the preeminent seige corps have close assault varient preds to clane out the cities of thier emenies?
Vanguard Vets- You want your best close assault troops at the froe front of your Fallorn Hope
Furioso Dreads- Honored Fallen of the Grand Company still ablr to wreck unholy havoc on the lackies of teh false emperor.

So saw the dawn again this morning, we do get some very nice sun rises and sun sets round here... I'm a little bit tired so may be rambling.

More thoughts on using the Blood Angels Codex for an Iron Warriors Army;

What you can't have.
Danta, Sanguinary Guard, The Sanguinairy- Sorry but models that represent whats best in the chapter just don't fit with Chaos Marines.

Storm Raven- Sorry but no, unless you want to spend the near £100 on the Hell Tallon and call that a Storm Raven untill this rumored Summer of Fliers comes round then that's a no.

Captain Tyco- Altough I'm not to sure about this one, he was insane by the end so I could let you have this one.

Mephisto- No, just no.

Razorbacks- Sorry, but no Chaos force has them yet, though I don't know why not

If not mententioned below with a reason then of course you can have it.
Death Company Tyco- Insane combat womble? Throw him into the breach, if he gets killed at least he'll of taken some of the enemy with him.

Astorath the Grim- Yes someone to take down the frenzied breach stormers and he is a nasty piece of work as well.

Chaplains- Just treat them as a Chaos Lord choice in this case.

Librarian- Sorcerer , Blood Lance would be handy wouldn't it?

Land Raiders as Dedicated Transports- Most of the Iron Warriors Equpiment would of been stored in the Chapter Houses the Legion was garrisoning, they would of had a lot of the large parts left after the Seige of Earth.

Assault Troops as a Troops choice- Well storming a breach in a fortress wall is close combat of course you want lots of assault troops going in there.

The Red Thirst- The Iron Warriors are known to get themselves a little worked up when it comes time to storm an enemy citadel, doesn't the Red Thirst fit with that?
Posted by Poxy Proxy Predator at 09:05 No comments:

I realised last night that this blog is just about one of my gaming hobbies, not all of them. It started out as my fumbling attempt to build me a bigga tank but is now a bit more as I'm reporting the work I'm doing on my Warhammer40K army but still that is only a small amount of the gaming I do. I'm also into RPG's as well as computer games, although I'm stuck with a PS2 for the time being as I can't afford a PS3 ( why buy a blu ray player and a games machine when you can get 2 in 1?). So here I am posting about more gaming.
I helped to play tested Third Eye Games Apocalypse Prevention Inc for the creator of the game Eloy Lasanta, which was a good game, only marred by players to stuck in their ways to give it a good go. We are now currently playing White Wolfs D10 game Aberrant, which is about Super Hero's. Before that we were playing White Wolfs Vampire The Masquerade, which we played for about 6 years, (the game went on so long 2 players got married and had kids before it finished, one of those involved meeting the girl, falling in love, emigrating, getting married, and finally having the baby). Now I'm not sure if that means I was a bad ST for not being able to finish it or good one because the players didn't want it to finish. We where playing the Transylvanian Chronicles, a story that starts in about 1190 and runs all the way up to 200* for the last installment. I added bits and pieces to the story and one of the longest running side stories involved time travel and players thinking that they could cheat me out of doing a story I'd spent 2 weeks working, after I got my head round what to do and got there agreement to go with the change to the story as I was at a loss for the last hour of game time that night, that side story lasted over a year, and involved much travel and dicking about in Space/Time, for game purests my main DPC was a Mage who had learnt to time travel from a mysterious stranger with a long flowing scarf and a blue box..., which is how I got around that major story hole.

Okay signing off for now as there is a crappy 1950's black and white sci fi film on channel 4 shortly and I want to be home to watch it.
Posted by Poxy Proxy Predator at 10:12 No comments:

Okay so yesterday while my 2 daughters were out at their mums for mothers day I started to pull apart the Deamon Hunters and take out the Imperial parts of my loyalish Marine army and go head long with Chaos, after taking out the Stern Guard, Vanguard and swapping the Assault Marines with the DA vets, taking out the Thousand Sons and a couple of other bits and pieces, I find I've got 80 models to play with. So that's 4 troops for my Iron Warriors which for now will be it. Also 4 troops for my Knights of Blood Army which comes kind of close to making it a playable army if I add the Khorne Berzerkers as either Berzerkers or Death Company I'm good to go, with the Seth model I've made and the Captain in Terminator Armour as options for my HQ choices. I'm amazed that I had all those model just sat around doing nothing, now all I need is some more paint to get going with the 2 new colour schemes.
Posted by Poxy Proxy Predator at 09:54 No comments:

The Games Workshop have totally re-done the Deamon hunters Codex and are releasing it this weekend. Now from what I can gather they have completely revamped the army list. Which kind of leaves me with a problem as I have a small Deamon Hunters force, 2 HQ's (1 Inquisitor, 1 Grand Master with Body Guard of Terminators), 2 Troops (made up of Dark Angel Veterans) and 2 Fast Attack Teleporters (made up form Chaos Marines and Khorne Berzerkers). Now with this new Codex my army is obsolete and I'm thinking of breaking it up and using it again, the Dark Angel Vets will go to make Assault Marines/ Raptors and 5 Sargeants or some Vanguard Vets thereby freeing up 25 models, as I have a spare 5 DA Vets knocking abou,t and the 20 Teleport Troopers give me another 20 models to play around with plus and couple of spares the I'll get from dropping the Imperial Elements from my mian army, the Chaplin, the Librarians, the Medic. Which means I can have 2 basic army lists, one for the Iron Warriors and one for the Knights of Blood supporting elements to my army. But if I do do this I loose an option army that I really liked the idea of of and enjoyed making as every modle was a conversion in one way or another
Posted by Poxy Proxy Predator at 11:14 No comments:

This post should of been up yesterday, but I had an emergency phone call at 3pm and had to get to the bank double quick to sort out my friends bank and then it's time for tea and all that. 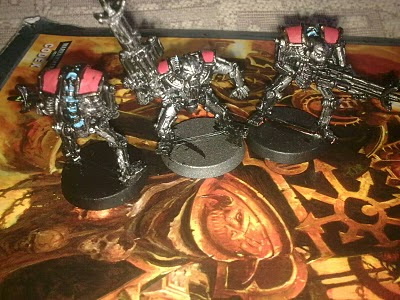 As has been discussed I'm working on a Renegade Army right now with Android support, well I was in town the other day walking past a Charity shop when I saw some 28mm metal robots I thought they look cool, lets have a closer look. Went into the shop and it turns out they are Rouge Trader era Necron Warriors, £5 lighter I walk out of the shop with them in a bag. Didn't tell the woman in the shop that the models in question are probably worth far more than that. Above you can see the 3 models in the range, I've turned one round so as to show the light blue wash I've done on the spine to denote the power supply. And with some judicious ebaying I've picked up 10 of the Space Crusade plastic Androids for a total of £4 and when is all said and I'll have 2 squads of 10 Chaos Androids, lead by Techmarines, armed with 2 melta guns.

Next step for this army is going to be the Troops, Elites, Tanks and Bikes which are going to cost money. Ebay here I come.
Posted by Poxy Proxy Predator at 13:36 No comments: