Latest Piece Of Work On The XIX Chapter 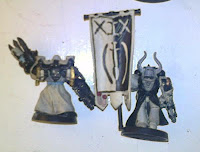 The smaller pic shows the Company Masters plasma pistol and storm bolters mounter on his Lightning Claws
Posted by Poxy Proxy Predator at 12:19 No comments:

Would you look at that? 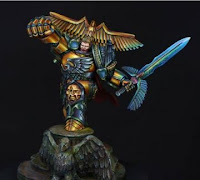 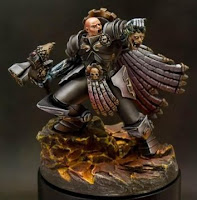 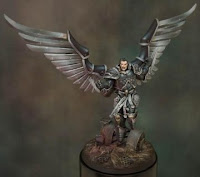 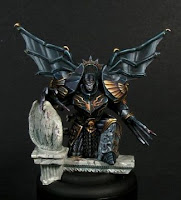 Just reading through my latest news letter from Wayland Games and saw the linbk to the Kabuki Models page and clicked on the link http://www.waylandgames.co.uk/kabuki-models/cat_1141.html?utm_content=harris159%40gmail.com&utm_source=VerticalResponse&utm_medium=Email&utm_term=Kabuki%20Models&utm_campaign=Wayland%20Weekly%20News%20Roundupcontent to take me to their page there and found some stuff that while certainly not Games Workshop or anyhting remotely like them, could "if you file off the serial numbers" pass as certain Primarches if you want to do that.
Posted by Poxy Proxy Predator at 11:57 No comments:

This is my Daemon Princess for my Black Sisters Army. I know she is rather small, see the bottom photo, but I'm thinking more of grace and lithe rather than rip your head off and suck out your soul.

Below you can see all 4 of my Daemon Princes. The top left is my XIX Daemon Prince, nothing done to this mini apart from paint and stick it on a turret from a tank kit, the mini itself is The Horned One from Slaine The Barbarian from the good old days of 2000AD, below that is the Daemon Princess which is just a straight paint job of Hasslefree Miniatures Siouxsie (HF4006) in 40mm scale. Next is my Daemon Prince Sanguinor/Asteroth for my Knights of Blood and lastly, but by no means leastly, is the Monster Conversion for my Iron Warriors, built from a knock He-man action figure, and is one day going to be replaced possibly with the Chaos Decimator from Forge World. 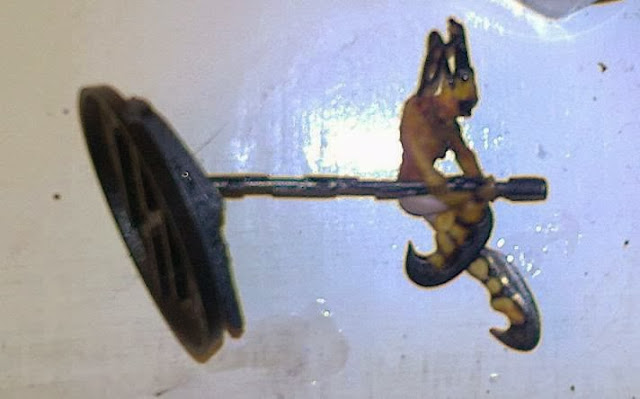 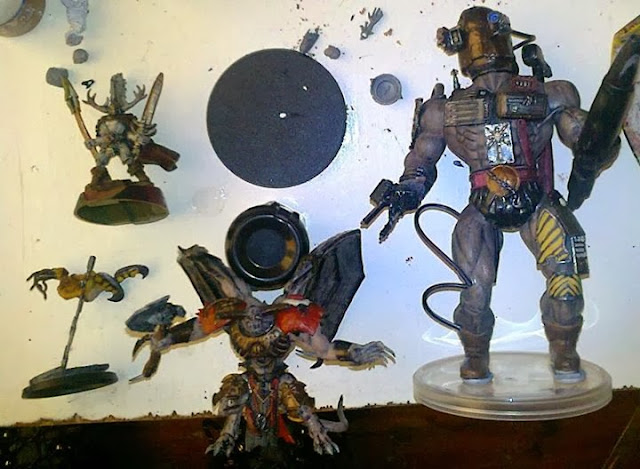 Posted by Poxy Proxy Predator at 11:32 No comments:

Some News on the Chaos Contemptor

Evan Pettittposted toForge World
hellloooooo forge world, I have looked at the chaos contemptor in the IA but is there any plans to make one any time soon

The Contemptor below is not mine, but one I found and thought I'd post here to show a more Choas feel. 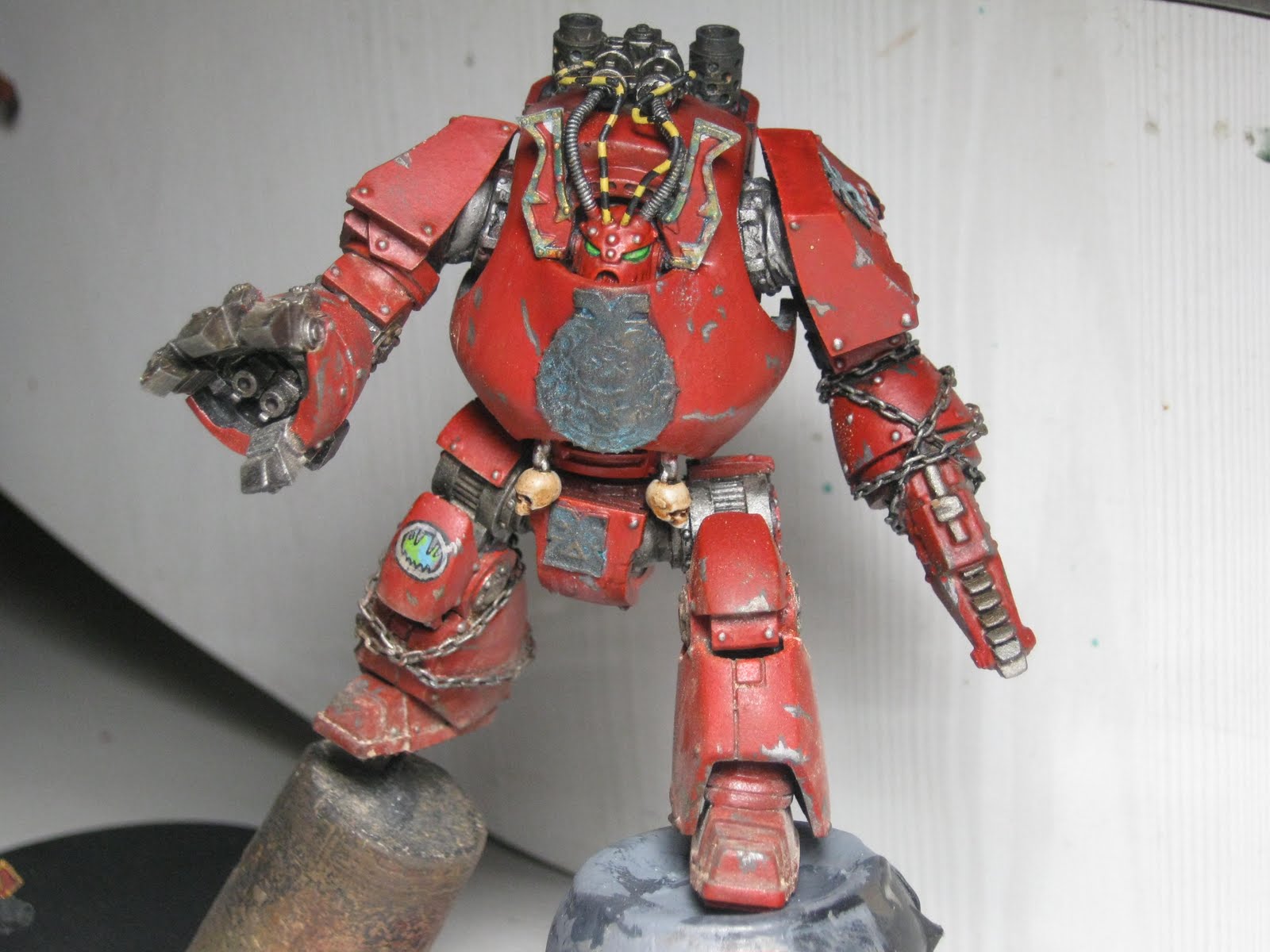 Footnote for Americans and other Aliens

The M6 is a motorway that runs from just north of Cambridge across England to Birmingham then it takes a right and runs over the Boarder into Scotland. 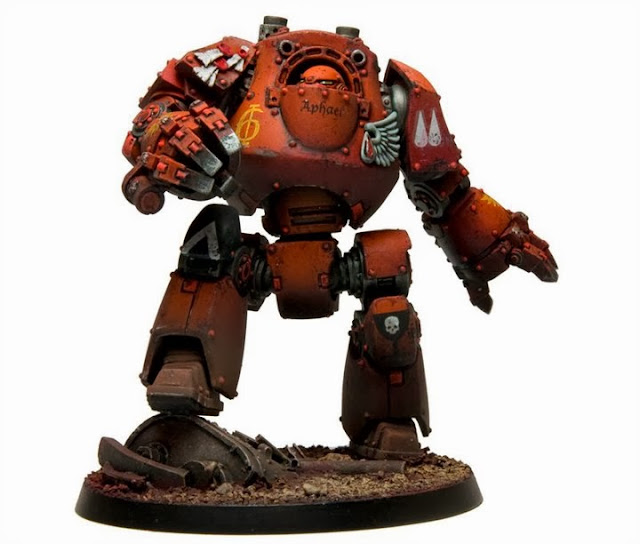 Posted by Poxy Proxy Predator at 12:42 No comments:

How The Contemptor Handled On The Table Top

Then the Termagaunts charged my Heavy Combat Squads and in the attack didn't really manage to do anything and my Marines took 4 of them out winning the combat and causing 4 more wounds. And then the Rippers charged to little effect I took out another base in that round of combat.

I moved 2 of my Light Combat Squads forward one towards the Warriors to take them on and the other towards the Termagaunt assault, I moved the Contemptor Forward as well to shoot and charge one of the Zpanthropes. Shooting was okay, I fired my bolters at from one Squad at the Warriors taking another one down, the other Light Combat Squad fired at a Zoanthrope which was saved by it's invuneradle and my Contemptor moved towards one of the other Zoanthropes and fored it's Stormbolters again saved by the invulenrable save. Assault time. I charged my CM into the combat with the Hormagaunt, which finished that one off and then consolidated towrads the Warriors. And now the BIG SHOW the Contemptor Charged, rolling with 4 attacks as I'd taken it with 2 Close Combat Arms, 3 of the attacks hit causing 3 wounds and the Zoanthrope was removed from the board, the Contemptor then consolidated towards the Warriors.

The Heavy Bloter Squad did some more damage what was left of the Termagaunts with the help of the Light Combat Squad that I charged into that fight and the Missile Launcher team took out the last base of Rippers. The last Light Combat Squad charged the Warriors and the Prime and took out another 2 Warriors, leaving only the Prime.
My Lord and the remnet squads he was with charged the 2nd Zoanthrope and took it out as well, leaving the board as it appears below nad the 'nid player pulling out of the game leaving myself and the Orks facing off, but as it was late and the other 2 players had to get home we called it a night

What did I learn;
I was lucky that my mate playing the 'nids rolled really badly on his to hit rolls with the Zoanthropes, half his shots missed and of the others one glanced and the other penertrated but only caused a crew shaken result and it was both in the same turn so only stopped me using it for one turn. But it did draw the fire of 3 Zoanthropes for most of the game which cost much the same as the Contemptor did points wise, and then when I had charged it into combat, possible a little late in the game it munched it's way through the 'nids like a good un and caused my oponent to conseed defeat. should I of charged it into combat sooner? Proberly, but I know how bad my dice rolls have been in the past and held it back out of fear of loosing it to some bad dice rolling. My shooting was very good and my assaluts were stunning, how many times is a Marine player going to out number 'nids?, and I think I played really well considering, I would of loved to have carried on and taken on the Orks but it was getting late and we all had work the next day. So next time Orks.
Posted by Poxy Proxy Predator at 11:17 No comments:

How Does the Contemptor handle on the Table Top?

So after spending over 50 pounds on it, weeks modeling it and months waiting to get it in a game, just how did my Contemptor do on the table top? Read the following Battle Report to find out.

4 way game with Chaos Marines, Orks, 'nids and my own XIX Chapter, played as Loyal for the purpose of this game. Before the game started it was decided to play side against side, so Loyal Marines where fighting beside filthy Orks and World Eaters where fighting along side 'nid's. At this point it becomes pretty much me against the nid's as that's were my focus was.

Table Quarters.
Orks and nids had trouble getting everything where they wanted it, Chaos and myself less so.

TURN 1
Nids and Chaos went first moving and running forward with nither player shooting. Orks moved and shot, I moved my heavy weapon combat squads into cover and then fired with everything else. I took out 5 gaunts with my first round of shooting. As the gaunts were in Synaps range they where fine.

Again Nids swarmed forward and Termagaunts and Hormagaunts ran along with the Warriors, the Zoanthropes moved and the reinforcement roll allowed an out flanking unit of Genestealers to come onto the table right behind my line. The Zoanthropes fired their Warp Blasts at the Contemptor, missing with 1 shot and failing to damage with the other 2 shots. At this point I'd stopped looking at the other half of the table as stealers behind my lines forced me to focus. I moved 2 combat squads back along with my Company Master to take on the stealers. My 3 light combat squad and my Contemptor again fired into the gaunts taking out only 2 this time. My heavy combat squads fired as well at the gaunts, Heavy Bolter team at the Hormagaunts and the Missile Team at the Termagaunts both taking out a few, shooting not so great so far. Last bit of shooting was at the 'stealers. Both combat squads had flamers and my CM had a Stormbolter the rest fired their bolt pistols taking out most of the 'stealers

'nids once more advanced, this time shooting with the Termagaunts as well as the Zoanthropes, the Zoanthropes this time managed to get 2 hits and 1 glance and one penertrating but after all results where worked out all that happened was a crew stunned, which was reduced to sheaken with the Extra Armour I'd bought for the Contemptor. The Termagaunts shooting did nothing.
My turn, my Contemptor was doing nothing so i shot again with everything I had taking down more Hormagaunts this time, leaving only one. The heavy bolter team shot at the Warriors this time, putting a couple of wounds on them and the missile team fired at the Ripper swarm, taking out one base.
In the assault my CM and the 2 combat squads threw enough attacks at the Brood Lord to take it down. My consoldaction moves took the squads around one side of the Contepmtor and the CM round the other side to back up the 3rd combat squad, as they
were about to be charged by the last remaining gaunt.

see next post
Posted by Poxy Proxy Predator at 16:12 No comments: