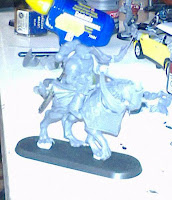 Here we have my Command Squad for my 2nd Company of The Lions Blades, these have been made from a mix of Empire Demigryphs, Breton legs, Ravenwing Marine Bodies and tank driver arms to hold the reins. The heads on 2 of them are conversions from the Marine lower jaw and mouth cover and Demigryph Knight helmets, the last head is one of the cowled heads from the Ravenwaing Box set. The Standard is the blank Standard that comes in the box, the arm that is on I've just given it a Marine paldron over the Imperial stuff it had on already. The Apocathery is just getting a couple of bags on his mount, rather than getting hold of another Command Sqaud box set or buying the 2 minis from Forge World. I'm having great fun making these and will be adding to long holsters to the Standards Demi and the Medic Demi to represent either a Melta gun or a Plasma gun as teh entry in the Codex says I can take those guns for 2 models in the squad.
Posted by Poxy Proxy Predator at 13:06 No comments:

I don't normally do this, but

I know I have a couple of repeat readers that come back now and again to view this blog, so for you and everyone else here's why I've copied half of the latest News letter from Forge World. As some of you know I've being doing 40K since the 80's, with a break for girls, beer and kids along the way, and one of the First White Dwarves I got had the conversion of the Mk1 Land Raider and Rhino into the Spartan. I always wanted to do this but being a kid, and being broke it was never going to happen, "Mum, Dad can I have £60 to buy these 2 different model kits so I can mash them up to make this one big tank? 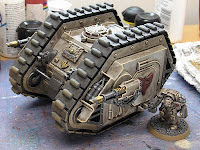 No son, do you think we're made of money?" is how that conversion would of gone. How little I knew that my mum was out running up a massive amount on credit cards...
So here we are over 20 years later and Forge World have brought out this little baby, and I want 3 of them! One is for my Chapter Commander, thinking lots of Chrome, tinted windows, hydrolic suspension, you know the full pimp mobile job. 2nd one will be for my 2nd Compnay Commander who's Command Squad will of course be boosted up to 10 Terminator Marines, so thats another 5 Tartaros Terminators, along side the weapon up grade kit for them to make them a mixed Squad, as long as in the next Codex Dark Angels can still do that of course, and the 3rd will be for my Assault Compnay Commander, he'll get a full 10 man Terminator Assault Squad as well.
Only thing left now is to do my living first as ther's no way I can justify to myself let alone anyone else how I've spent over £100 on a tank while I've still not finished my living room 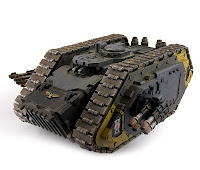 Hi there,
In this week’s newsletter we’re excited to announce that the Spartan is available to pre-order. This new kit is based on a Rogue Trader-era design, now brought up to date by sculpting legend Phil Stutcinskas. We’ve also got an events update for you as we are now accepting reservation orders for Games Day Germany.

Space Marine Spartan Assault Tank
Spartan Assault TankAn armoured transport of truly massive proportions, the Spartan is a heavy assault tank previously all but unknown outside of the revered Space Marine Chapters and the secretive Adeptus Mechanicus. The Spartan is a huge armoured conveyer, dwarfing even the hallowed Land Raider, whose purpose is to carry a large body of troops into the very heart of an enemy’s battle lines, weathering weapons fire that would be the death of any lesser vehicle.

Its design bears clear connections with that of the mighty Land Raider, and its genius is such that the greater proportion of its interior space is given over to a transport capacity greater than any other Imperial vehicle save the super-heavy Gorgons – being capable of carrying twenty-five power armoured Space Marines into battle. It is, however, considerably faster on the battlefield thanks to potent reactor-driven motive drives, and it posts an equally potent armament in the form of sponson-mounted quad lascannon batteries and secondary heavy bolters.

Many Space Marine Chapters maintain these huge war machines as part of their arsenal and deploy them into the most hellish and destructive warzones and battlefields, where even the mighty Land Raider would be torn asunder. Their greater transport capacity also finds particular favour amongst those Chapters who possess many suits of Terminator armour such as the Minotaurs.

The Spartan Assault Tank, designed by Phil Stutcinskas, is an enormous multi-part resin kit that features a detailed interior. Experimental rules to allow this armoured behemoth to be fielded in games of Warhammer 40,000 will be available to download soon, and the Spartan itself can be pre-ordered now for despatch from Friday 29th June.
Posted by Poxy Proxy Predator at 12:10 No comments:

This is my counts as Ezekiel for my XIX Order The Lions Blades. I'm using the Company Champion body from the Command Squad box, an Orgyr sword on a long shaft and a Khorne Berzerker back pack. The shield was once again found on a rummage thruogh the club bits box. 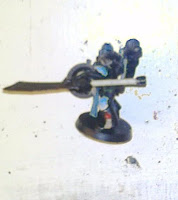 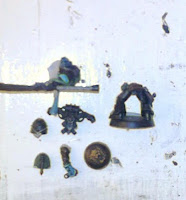 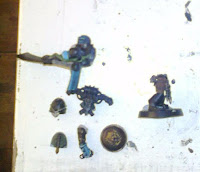 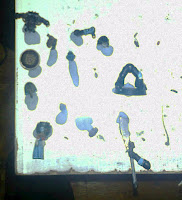 Sammael. at least counts as. 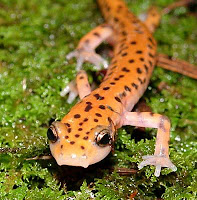 This is something I don't normally do, but I'm adding the pic of the Salamander to show you where I was aiming at with the colours of this dragon.

The dragon itself is a Plasma Dragon, the wings come from Hasslefree Miniatures and the Sammael model is made from a Ravenwing rider. 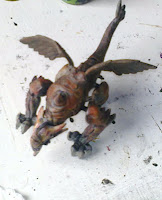 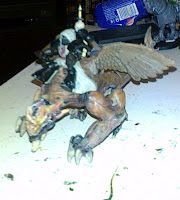 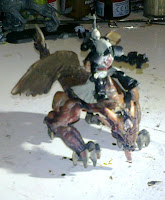 Posted by Poxy Proxy Predator at 11:35 No comments:

Or my "and now for something completely different" moment.
On June the 1st 2012 between 0720 and 0800 the Olympic Torch Relay went through my home town and I got up, meet my oldest daughter and her mum and we watched the torch go past us, here are the photos 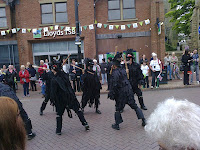 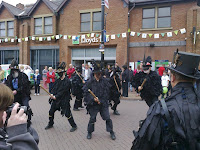 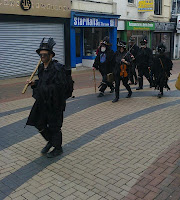 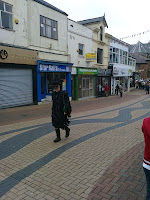 
Bottom 6
1 and 2 The crowd at 7.30, I've seen the town a lot less busy duiring business hours
3 Big horses
4 The Mascot, waving at us to let us know the Troch is 6 minutes away
5 The Troch being carried up into town
6 The Torch going through town on Union Street, that's the Library I'm putting this post up from in the background. 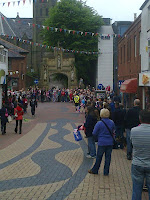 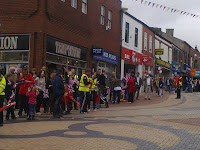 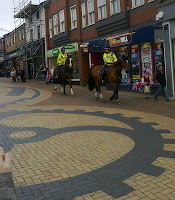 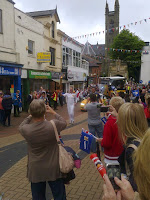 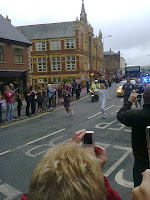 Posted by Poxy Proxy Predator at 09:29 No comments: 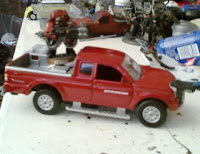 This is a toy Mitsubishi Truck that I picked up the other day to try and make into a counts as Attack Bike for my Ravenwing for the XIX Order(just finished reading The Primarchs, hence the change). I posted various photos onto the Adeptus Conversions page on Facebook asking what peopls thought and I got shot down, badly, but I carried on regardless as 1 person thought it was a good idea, and you should only listen to the positives. So I looked at teh truck when it had it's guns added and thought that that looks like one of the old Dark Future car, but bigger of course as Dark Future used the matchbox sized cars. So armed (ha) with these ideas I thought how can I still use this truck, I'm not throwing away £3! So I trwaled through my failed/unfinished project collection and found the old Thunderbird 2 I'd planned to use as a counts as Storm Raven and took the aluminium mesh out and cut it to fit the windows. I then used the last of the black spray paint to paint it black, I forgot to do the tail gate and the back of the inside. 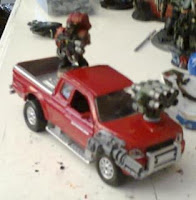 When it was dry I wiped the wheels down as they where still tacky and painted the tail gate and tool chest black. I then dry brushed the wheel hubs, running boards and bull bars with Boltgun metal, before hunting down all the packs I've got in my bits box painting them up and gluing them to the back of the truck, I also added to jerry cans to the far side of this truck that you can't see from any of the photos. I've added a photo with all the Survivors as well as a photo with it gunned up as well, as I still like the look of that. I've gone as far as trying to get hold of a copy of Gorka Morka and run that with these cars and Zombies on the track, as the truck comes with a Mini on a trailer, I'm going to add mesh to the windows and let my youngest paint it up for her Character in the Zombie game.

Posted by Poxy Proxy Predator at 09:50 No comments: