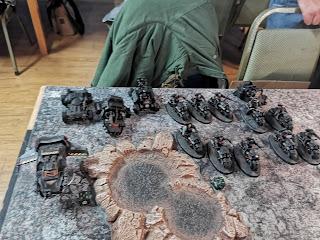 Had a game last night!

And even more surprising was on the winning team!

Was a 2x2 game, each side taking 1000 points, with sides being my 2nd Company alongside Legion of the Damned going up against an Evil Sunz Speed Warrgh and a Tzeentch demon force.

Between the marine forces we tabled the Evil Sunz and chose to collapse a flank we swung around after dealing with the Orks and with the demons only had a Lord Of Change, a squad a pink horrors, The Changling hiding in there and a squad of Brimstone Horrors holding an objective.

Almost had revenge on the Changling as I had the Talon Master, a Land Speeder and 6 bikes all about to start blazing away at it.

Posted by Poxy Proxy Predator at 09:23