After repeatedly loosing that fracking tilt plot I gave up and order the Imperial Fist upgrade sprue, as well as the Dark Angels up grade sprue as well, see below, I was able to collect it from the post office yesterday but was far to worked up to do anything.

This morning, feeling calmer I got the blue on the shoulder pad and plate first thing then went and got some stuff from the market, I got the nuln oil wash done, then when dry Khorne Red on the fists and other bits, another dash of nuln oil on those before wazzdakka red highlights and an evil Sunz scarlet top high light. 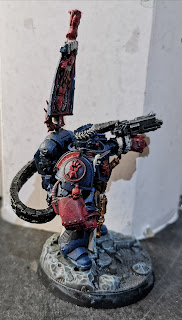 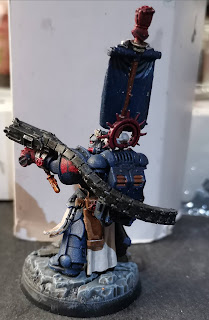 I've spent so long picking up and pausing this I had completely forgotten about the shells in the ammo hopper, and my brass Scorpion has dried up so I used the gold base coat on them to finish this one off.

Next up is Ezikael for my Dark Angels Successor Chapter The Lion's Blades.

Posted by Poxy Proxy Predator at 16:17