Finished The Last Of The Blade Guard Veterans

This week I had a couple of days off, prior to that I'd had 2 days off in the previous 28 days, so I focused on finishing the Blade Guard Veterans, after I'd taken these photos I got the bases finished. With these done I have to lieutenant and 10 Assault Intercessors left to do, but still undecided on what to do those as.

When I was done with those 3 and had boxed them up I started on the next Björn the Fell Handed version, this time having him mounted on a Thunder Wolf. 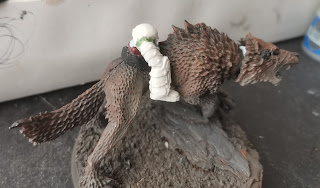 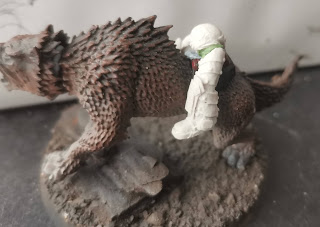 I've used some 3rd party biker legs that had to be adjusted to fit around the Thunder Wolf body and I have yet another Gregor Fell Hand on the way to finish this one off.

Hopefully tonight I'm getting another Ezikael delivered along with some Ruststalkers, the Ezikael is going to stand beside the Primaris Ezikael and I'm looking at something to make a Darth Maul like character to go up against, the Ruststalkers are going to be used for bits mostly, with at least 1 being used to make a 4 armed Necron for the Action Ezikael to stand off against.

Posted by Poxy Proxy Predator at 10:49