First of the month, time for a new vow. Oh yeah new year as well, later on the vow for that.
First up I didn't do so well on my monthly vow last month, in my defence the first 3 weeks my time off was pretty much the 8 hours of sleep a person needs and then my stuff was packed away 'for christmas and new year'. No wonder my stress levels are so high. Right so made a start on the DV Ravenwing bikes last night, pre midnight and pre drinking, I intend to finish those 3 off today or Sunday, next up is the Chaos Bikes for the Malal Dæmon army, these are counts as Blood Crushers. Jet Bikes next up, I had the Harlequins out over the weekend and did a small amount of reshuffling and need to repaint a few, the blue, orange and white Troupe are now Troupe Freeze meaning just Team Deathstrike provide Jet Bikes and Air Support. Some pilots and gunners are going to need repainting, as well the 10 'quins & Wytches I was using as Team Freeze & Team Deathstrike. Bane joined my League of Shadows Mimes alongside Ras Al Ghul. The Mad Hatters Troupe was rebranded The Milliners (you may have needed to watch Channel 4's brilliabt Utopiea to fully get that one), The Scarecrows Troupe got dry brushed with brown, this leaves me with Poison Ivy, Harly Quinn and The Joker needing Troupes, most likely going to do these 10 as Harly Quins Troupe, I'm also thinking of a Raveger painted in her colours as well as a treat. So with the re-branding and Death Strike Star Player removed/ replaced with Greegann from Cleopatra 2525 or shunted into The League Of Shadows (in which case that gives The Mimes 3 of the 10 Star Players and the 4 bodyguard/ Incubi that support the Solitaire/ Succubus), so this leaves me 23 more Harlequins, 3 more Raiders, 1 Bomber, 1 Razorwing and 1 Venom to buy for this army. If I ever add artillery it'll also be black and orange as well as any Guardians/ Kabalite Warriors. So yes back to the jet bikes, I have 6 left currently that I'm going to split up, 2 to the Dæmon army as it's a unit of 5 Seekers and the other 4 as a start of Team Death Strike. Timings may be changed depending on what I'm taking down to Nottingham on the 24th. While down at Warhammer World I intend to pick up the World Eaters Contemptor, the Space Wolf Dread and a Rotor Cannon set. The Contemptor is for the Dæmon Army, the Blood Thirster, the Space Wolf dread is for axe and Murderfangs claws for the Contemptor and a Bjôrn The Fell Handed I plan on painting as a Blood Raven.
Okay 2015 Vow, look to get the big guns sorted on the Titan, start The Knights Of Blood/ Carchadons (possibly re-paint the Storm Talon and buy another one), start the Exodites as well. Save some money for more Forge World stuff, get a couple of Changs Bird Of Prey and a few more games of Star Trek Attack Wing. 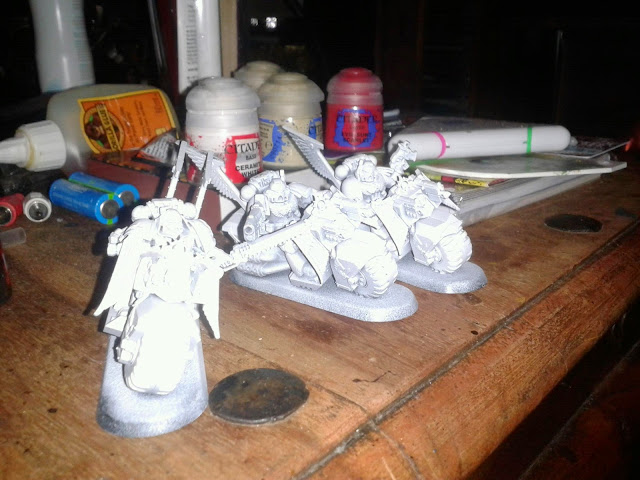 Posted by Poxy Proxy Predator at 09:03