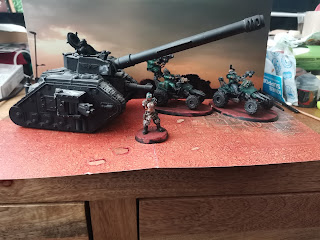 Behold The Compensator has arrived!

As Ricci is a bit of a knock off of Tank Girl (comic book not film) and it's satirical slant on macho comics from the 90's a tank with a massive cannon was a must, the fact I've wanted a reason to buy one of this version of the Russ for years was a happy coincidence.

A brief bit of background on the tank.

Lost in the Ash Wastes. Found on the outskirts of a tank battalion training ground, just don't ask about the rusty brown stains inside the tank and those bullet sized dents in the crew compartment, retrieved, stashed and forgotten about at the distant Orlock mining outpost of Dead Rat. Rediscovered by Ricci as a kid, she got the engine firing after months of tinkering. A serviceable tank bought her out of the 2 options of mining or "hostess" and onto a Cinderjack road crew.

The house have told her they haven't been able to get any shells for the main gun, but have found some paint shots, the battle cannon is good for 1 shot and the heavy bolters have a semi reliable supply of ammo. There's a nagging doubt in Ricci's mind that the Cinderjack nobles might actually have more ammunition for the tank but don't want to give it to the daughter of prostitute and some unknown miner, and if another push by Cinderjack nobles to take over the Orlock Clan comes the the nobles might try to come for her tank.

Ricci has made a couple of mods to the engine since she got it working (need the Outlands book for this one).

I kind of ran out steam at that point. 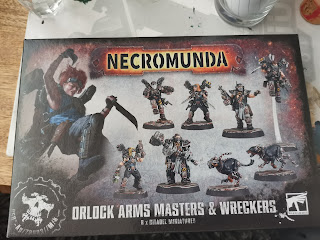 The Wreckers box also arrived yesterday, which means I have a GW female body I can build if I ever take this gang down to Preston or Warhammer World, or give her a bigger gun than the first stubber she currently has.

Posted by Poxy Proxy Predator at 20:29