First Game With The Harlequin Codex

So got the first game in with the new Codex last night, 1000 points with 4 players so 2000 points a side. The Masque Of The Twilight Players alongside a Wyldrider Clan from Saim Hain against Tau and nids. 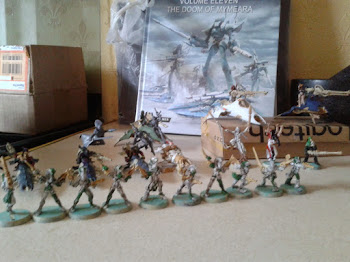 I took Cegorachs Jest and The Heros Path Formation Saim Hain took a lot of Wraiths. My Harlequins were outnumbered by the nids and outgunned by the Tau, I pretty much ignored the Tau for the first part. 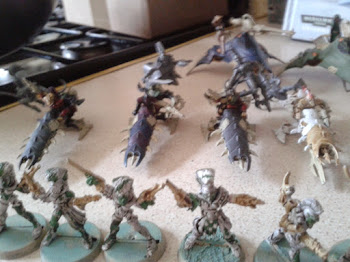 The Skyweavers did okay, I didn't get much shooting in with them before they got swamped by gaunts in close combat, I forgot the hit and run rule and if I had other elements would have been hit by them. They took 2 turns to go down and took a large number of gaunts down with them. 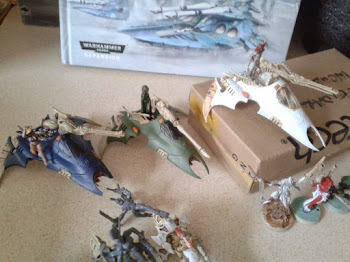 The Voidweaver Squadron The Diplomatic Corps did well, although I think in future I'll go full Prismatic Cannons over Haywire Cannons, as the various settings the cannon has give it great flexibility. They took out the Zoanthropes and by accident took some wounds off one warrior squad. 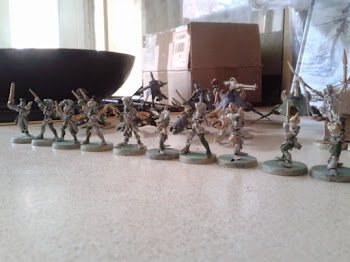 Troupe Milliner did okay, taking a Carnifex out in close combat, love the Kiss Of Death attack, but didn't do to well in the open. 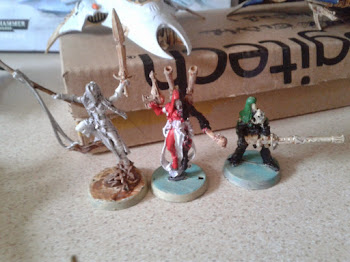 The Heros Path did well. Distracted half of the Tau's shooting for one turn, the Solitaire took shoots from 2 Fire Warrior Squads, a Crisis suit and everything from a Sky Ray in 1 turn, being given 8 wounds. He saved 7 of them, being taken out by snap shots next turn when they charged the Crisis Suit next turn. The Shadow Seer took him out in the close combat. The Death Jesters shooting didn't go well, I should have just stuck with using his cannon as a cannon rather than using Shrieker ammo.
Yes I had fun, yes I'll be taking these 2 again in future and I look forward to the games I get with them.
Posted by Poxy Proxy Predator at 12:55