Thunderchild was so named as on the night of his birth the worst storm in the memory of the Ancient of The Clan Dia'Beetes raged. His first cry silenced the thunder and so the child was named. Timberwolf was born far to the north to The Clan Bluejay at the same time. Both children grew up and became troublesome youths. By their 12 summer both were inducted into the Warrior lodges of the Clans as was the custom of Sah'Hal. Both warriors noticed the Sky Trails of Watchers as they fought the rival Clans and resolved to find the Watchers and claim the right to join the Sky Warriors. Thunderchild set off at mid summer, Timberwolf had set off a month earlier and both journeyed the same way, avoiding rival Clans land and hunting small game. As they neared the place where the sky trails seemed to come from Timber Wolf saw Thunderchild first and approached him, , they had both been traveling alone for weeks and wanted company, recounting his name, his Clan and his deeds, Thunderchild followed suits, stateing he intended to enter the Watchers Hall and demand to be admitted to the Sky Warriors. The 2 young warriors agreed on a race, the next morning they set off in the direction of the Sky Trailes. 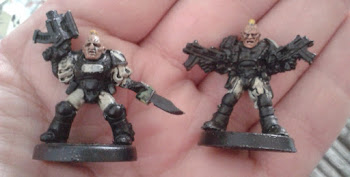 In the journey to Mount Raygun, home of the Silver Streakes that burn from afar the 2 young warriors started off as rivels, but their time alone in the wilderness had made both desire at least some company, and over time and many perlious moments the 2 bonded, finding their respective strenghts complemented each other. After many months of travel the 2 stood before Mount Raygun and shouted for admittance. A huge portion of the cliff face opened revealing a large open space with strange boxes nearby and 3 of the Star Warriors. 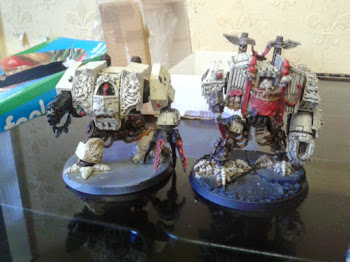 Judged worthy of joining The Lion's Blades Thunderchild and Timber Wolf were operated on and slowly became Scouts.
The idea behind this came to me as I named the old metal Venerable Dreadnought, why not make miniatures of these 2 throughout their time as Marines. So far I plan to replace the dagger with a couple of the small chain saws you get with the Tartarus Pattern Terminator Amour to give him a nasty claw, already got an Assault Veteran that I can use as Timber Wolf, just need one I can call Thunderchild as well now, and of course the pair in Terminator Armour. I know it isn't leagel but thinking Thunderchild gets a plasma cannon and Cyclone missile system, Timber Wolf gets chain saw/lightning claws.
Posted by Poxy Proxy Predator at 23:14