I'm 2 days in and already feel like I'm behind schedule! I've ordered Bjórn again but the supplier is currently out of stock so he'll land sometime from the middle of next week.

So that's 1.5 dreads delayed while I'm waiting.
Last night I pulled out the box of XIX Order Dreadnoughts to see what's what with them and have taken one out to re-paint for the
black shields Glorious 1000 that are hiding in my Knights Of Blood, repaying an honour debt to the Knights of Blood after they gave the Glorious 1000 a ship to get their Gene Seed to earth, this is the orginal metal Furioso Dreadnought, plan A is to give it a second melta gun and call that a twin linked heavy flamer.

And there is also the next Death Company dreadnought in bits, waiting for those Murder Fang claws, but I can at least get this built and painted now.
I will pack the 2 Space Crusade Dreads later so I can get the magnets on them and green stuff. 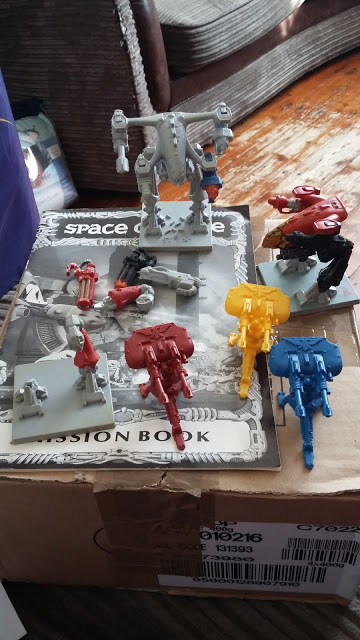 I've also got the other 2 bodies packed as well to match colours and magnets, and to get opinions on if I should keep the 4 armed version bone or paint it black.

Posted by Poxy Proxy Predator at 17:36